Bruce Arians wants to coach the Cleveland Browns. The old coach has made it clear on multiple occasions that the one coaching opportunity he really wanted was the Cleveland job. He expressed interest in the job every time it has opened up since his time as offensive coordinator for the Browns (2001-2003).

When talking about the Cleveland position Arians said, “That was the job I always wanted. I felt like Cleveland deserved a winner. They have the most loyal fans in the world. I just thought it was a goal of mine. Every time that job came open I tried to get it.”

Instead of taking a flier on a veteran coach with extensive offensive knowledge and a proven track record of turning around a franchise, the Browns’ front office went with a… different approach. Since Arians’ time as OC, Randy Lerner and Jimmy Haslam have brought in a murderers row of big name coaches like: 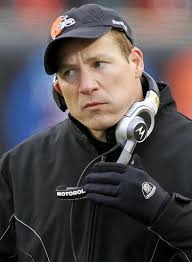 It’s confusing to me that somebody who was so willing to take on the challenge of rebuilding this struggling franchise, and is as respected as Arians is, was never given the chance to do it. I guess we will never know if he could have been the great coach that Cleveland has desperately been searching for since their 1999 return….or will we?

During Sunday’s broadcast, Arians made multiple comments about how much talent the Browns have and he seemed to take subtle jabs as Hue Jackson throughout the game. He called one of the Browns’ timeouts in the 4th quarter “different” and said that the talented Browns just needed to get confidence, which I took as a shot to the coaching staff not having them prepared.

At the start of the 2nd half, he was asked what the Browns need to do to get the offense going and he responded by saying they need to get the ball to all their playmakers. The tone in which he said it made it sound as if he was baffled that Todd Haley and Hue Jackson didn’t think of that earlier.

Personally, I really like Coach Arians and his brash style of coaching. He’s a little rough around the edges, but that could be what this team and city needs. If the Browns could keep defensive coordinator Gregg Williams through a coaching change, he and Arians could form the most “offensive” coaching staff in the NFL history.